GALLERY DIVISION AS SEEN FROM THE NAVE OF THE CATHEDRAL

As with other forms of church art, organ building in the 1960’s turned away from the false and imitative.  The Casavant pipe organ at the Pro-Cathedral of the Assumption was made to look like an organ and to sound like an organ (not an orchestra).  Even the chains supporting the sanctuary division are what they appear to be–chains strong enough to support a ton of oak, mahogany, tin, lead and zinc chests and pipes.  Colourful bands of red felt pack the sliding cannister tops of the pedal pipes and tiny turned tuning handles surmount each of the oak pipes of the Holz Gedackt (wood covered) stop.

CHANCEL DIVISION AS SEEN FROM THE REAR OF THE CATHEDRAL

The large pipes of highly purified zinc are left their natural colour and not gilded to look like the gold they are not.  A reed stop of copper (Krummhorn) may be seen in the gallery division.  All of the smaller pipes are made of spotted metal which is an alloy of 55% tin and 45% lead.

There are 2091 pipes in the organ which is a three manual (3 keyboards), twenty-nine stop (29 voices), forty rank (40 rows of pipes), baroque style electro-pneumatic organ divided into four divisions: Great, Positiv, Chancel and Pedal.  Some of the lowest pipes are at 16 foot pitch for which the longest pipe stands 19.5 feet against the tower wall.  The highest pipe is 6.5 octaves above piano pitch and is a mere 4 inches in length.  Each rank of pipes represents a group of voices on the organ sounding as flutes, reeds or pure organ sound.  It takes 61 trumpet pipes to make up the trumpet stop.  All of the voices in the organ are ‘baroque’ so the sound of the organ is what was heard in churches for 500 years prior to the late 1800’s.

The part of the organ which is not baroque is the action.  The various sounds which the pipes make are controlled by electric wiring and magnetic valves operating pneumatic valves in Pitman wind chests developed in the 1920’s.   They were re-engineered to operate on the very low wind pressures used for baroque-style pipes.  A newly developed winding system made it possible to suspend the sanctuary and gallery divisions.

The builders, Casavant Freres Limitee of St. Hyacinthe Quebec are the second largest firm of organ builders in the world.  The installation and voicing were supervised by Alan T. Jackson of Toronto, Ontario who is the district sales and service representative of this company and still maintains the organ to this day. The organ was dedicated on October 2, 1967 to the memory of the 42 young men of the Cathedral who gave their lives in the Second World War by Bishop Francis Spence, Military Ordinary of Canada. Bishop Alexander Carter, Bishop of Sault Ste. Marie blessed the organ.  In his closing remarks, he proclaimed “every time the organ sounds in this cathedral, it will be stated that the church never forgets her children”.

Following the dedication service, world renowned organist Antoine Reboulot of St. Germain des Pres in Paris, France offered a short concert of five pieces.  Later that evening, he gave a full scale performance to a packed audience.  The program for the concert follows:

* Between 1980 to 1990, several changes were made to the organ in order to expand the organ’s abilities for choral and vocal accompaniment and to accomodate the relocation of the choir in the gallery.   These changes, identified by an asterisk on the original stop list were as follows:

1.  The 8′ Salizional  on the Chancel was moved to the Great Division to replace
the Bordun 8′.
2.  An 8′ Erzahler was installed on the Chancel to replace the Salizional.
3.  The 2′ Oktavine on the Positiv was replaced with a 2′ Waldflote.
4.  The top three octaves of the Waldflote 4′ on the Great were removed and the
Bordun 8′ was put in place.
5.  The top two ranks of the Scharf V on the positiv were silenced.
6.  The top rank of the Mixtur V on the great was silenced.

As the music ministry in the Pro-Cathedral grew, it became apparent that the position of the choir in the sanctuary was not practical in such a small space so the choir was relocated back to the gallery in 1982.    This meant that the organ pipes at the front of the church could no longer be used for the choir.  The main organ in the gallery had too much of a sound for the choir because it was designed to support congregational singing.   The position of the console (the place where the organist sits and plays) was such that the choir had to be split into two groups which was not ideal.   Some tonal modifications had been made throughout the years which slightly improved things.   Various consultants and organists came to evaluate the instrument.   Each time, they concluded that while being a wonderful instrument,  the organ lacked a Swell or “expressive” division.   While it was a general agreement that the addition of this expressive division was the way to go, the costs were high and it was decided to defer this plan until such time as a major fundraising opportunity was able to take place.

With the approach of the Centenary Building Project in 1998, the organ issue was revisited.  We seriously investigated two options and presented them to the parishioners.  Option 1 was the addition of an expressive division to the existing organ, upgrading and relocating the console (the ensemble of keyboards, foot pedals and controls where the organist sits and plays) to the side of the choir loft, and the complete cleaning and restoration of the instrument.  This new division would be installed underneath the existing organ in the choir loft in a swell chamber.   12 new sets of pipes will be contained there and some minor modifications would have to be done to the existing pipework to place the organ in synch with the new pipes.   Option 2 was to basically clean and repair the existing organ as it stands,  upgrade and move the console.  98% of the parish opted to go with the first option.   The Centenary Campaign took its beginnings with a mandate to raise $700,000.00 for the building project which included the addition of a Swell Division to the existing organ.

On Sunday, February 11, 2001, Bishop Jean-Louis Plouffe signed a contract with Casavant Freres Limited, the organ’s original builder for a new Swell Division that arrived in early 2003.  The work done was in two phases.  On April 17, 2001, the cathedral was closed for renovations.  At that time, the organ was removed and carefully stored so that construction work could proceed in the cathedral.  The console
(*see note below) was sent to Toronto where it was upgraded and prepared for the new division.  Once the work on the building was completed in the fall of 2001, the console was returned to the choir loft in a position on the south-west side facing the centre line of the cathedral.  The original organ was returned to its place, cleaned and revoiced.  Some tonal work was done on the existing organ in order that the new division would blend with the old.   The existing Great and Positiv mixture stops were revised to give a deeper sound.  The Pedal Subbass 16′ were rescaled by two notes with new wooden pipes and the existing 16′ pedal reed was replaced by a Posaune 16′ which is a larger and fuller sounding reed to support the reeds in the new swell.   A 16′ flue stop is playable from the Great.   Some of the changes made in the 1980’s will be reversed to restore the organ back to its original intent.

The specifications of the swell organ are as follows:

* The console has remained a three-manual.  The Positiv was moved to the bottom keyboard, the Great remained in the middle and the Swell now occupies the top keyboard.  The Chancel is floating and playable from all three keyboards.

If you want to know more about the organ builder, visit their site Casavant Freres Web Site

From our Photo Album 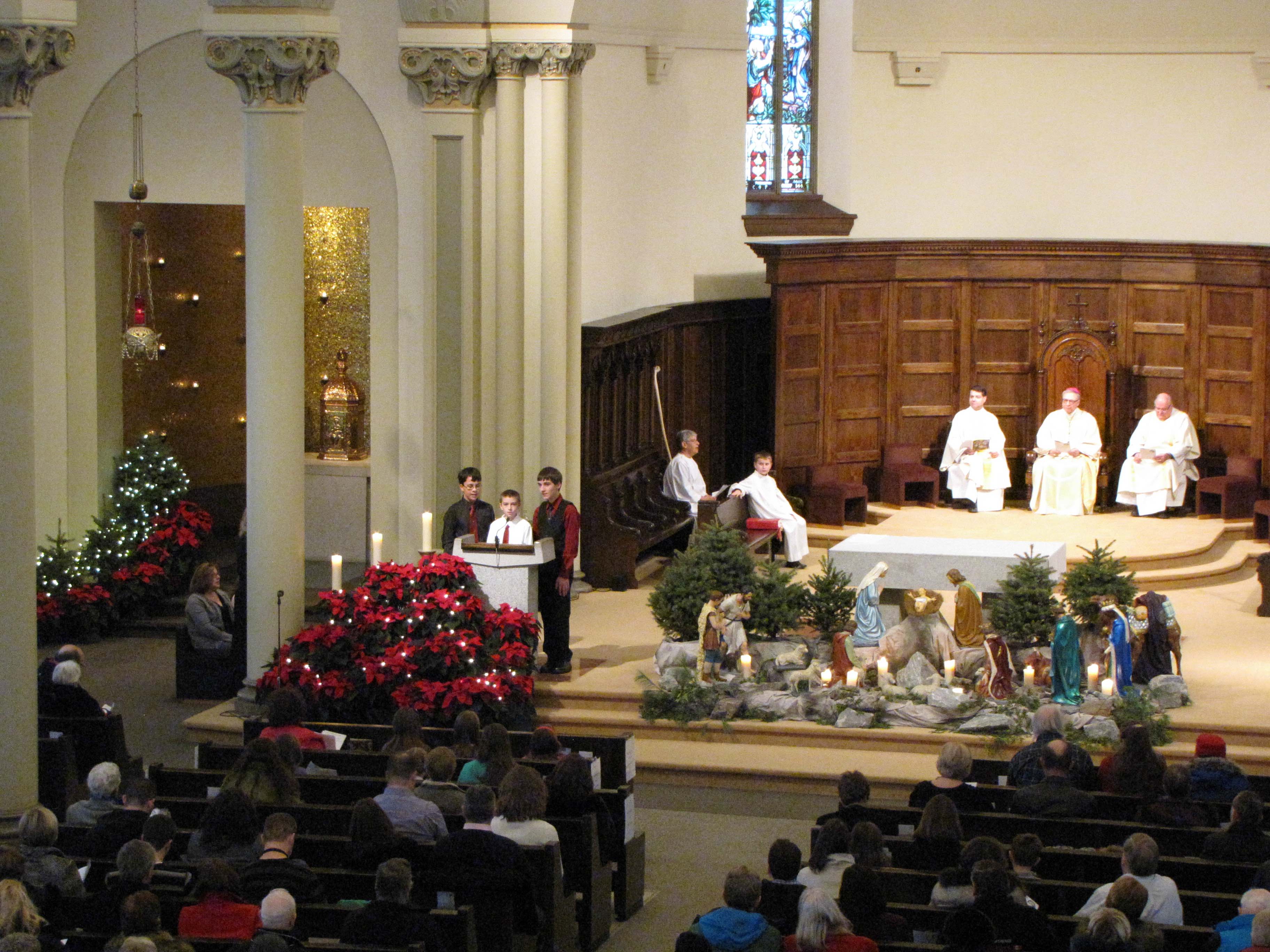