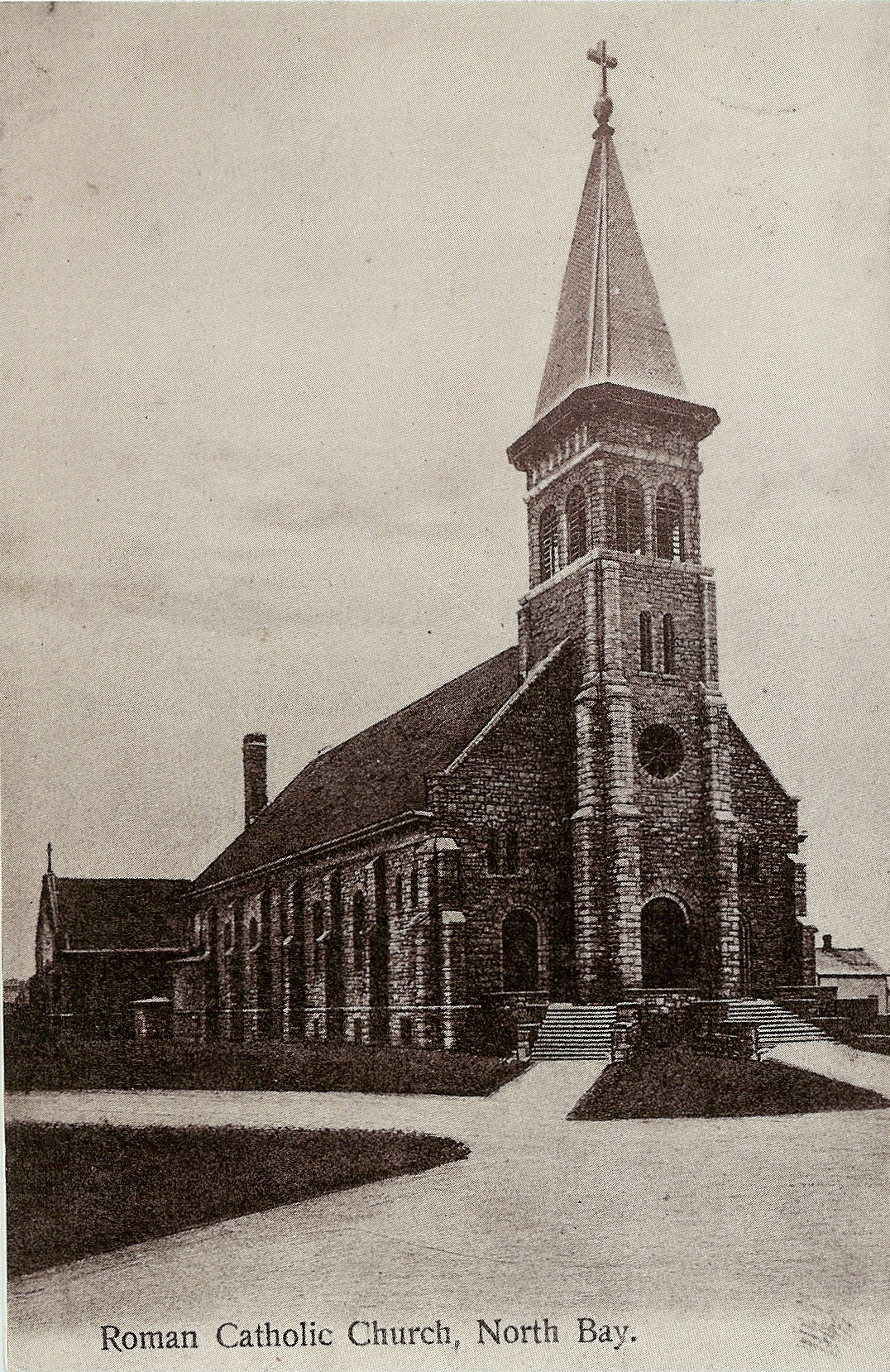 The cornerstone for the Pro-Cathedral of the Assumption was laid in June 1904, however, the faith community here dates back to 1881, under the name “St. Mary’s of the Lake” when the original location of the church was on property on Main Street West.
During the 1800’s there was considerable missionary activity due to the establishment of the historic fur-trader route through the French River, Georgian Bay and the Lake Superior regions At this time a number of missionary chapels and outposts were founded. The North Bay Chapel of St. Mary’s of the Lake was built in 1884 and was placed on a foundation in 1886 on a property on Main Street West in North Bay.

It was soon an obvious conclusion that the vast northern segment of the diocese could no longer be adequately served because of the increase in population as well as the distances which had to be traveled. As a result, the Diocese of Sault Ste. Marie was formally established by Pope Pius X on September 16, 1904 and Father David Joseph Scollard was appointed its first bishop.

During his time as pastor of St. Mary’s of the Lake, Fr. Scollard and the community set about to build a more permanent place of worship. The small framed church on Main Street was inadequate. 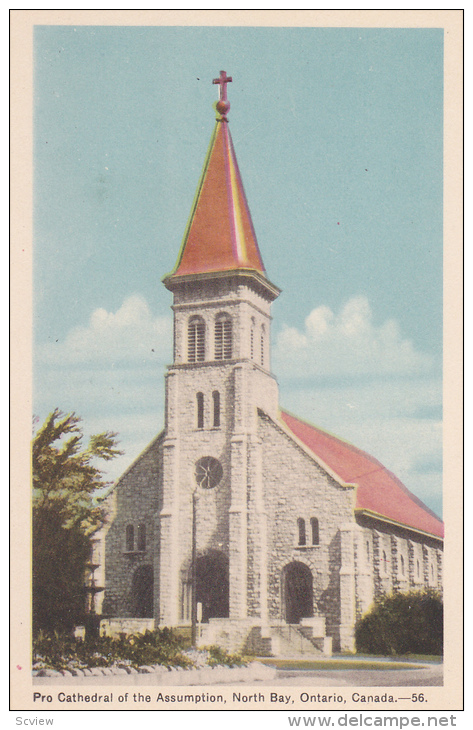 -Cathedral of the Assumption” was completed and dedicated. It was blessed and dedicated on the last Sunday of Advent December 17, 1905. The final cost was $65,000. The rectory was more commonly known as the “bishop’s palace” was built in 1911 of the same quarried white limestone as the church structure.  The limestone came from Longford which was transported to North Bay via the Canadian Pacific Railway.

The Pro-Cathedral of the Assumption was designed by Harry Angus of Thompson and Angus Architects.

Some confusion remains as to why we are called the “Pro” Cathedral. The actual cathedral of the diocese is in Sault Ste. Marie (Precious Blood Cathedral). However, because the diocesan bishop has always lived here, our church has been called the “Pro-Cathedral, ‘pro’ meaning “instead of” or “in the place of”. To clarify, the Pro-Cathedral has been and continues to be the Bishop’s parish. As a result, the Pro-Cathedral maintains a special significance for all the faithful of the Diocese of Sault Ste. Marie, while representing the long faith roots of the local North Bay community.

During the summer of 1923 many renovations took place. Included in the work were plastering repairs, changing of the capitals on the pillars and the painting of the walls and ceilings. Also, new electric light fixtures and new wiring were added and the marble altar and baldachino and drapery were installed as well. The whole cost was just over $30,000

In the spirit of renewal asked of the Church by the Bishops of Vatican II in 1967, there was a desire to go back to the roots of the Church, back to its purity. In the process, many of the more decorative aspects of the church were lost, including the three stained glass windows in the sanctuary, the frescoes and wood work.

During the period of 1980 to 1986 some large scale repairs of the Pro-Cathedral took place. What started out as a minor repair became a $150,000 reconstruction project to the roof, steeple and cross, with the last major job of removing cleaning and re-leading of all the stained glass windows. During this project, the tower was re-pointed, the steeple braced, and the rose window repaired. The cross, which was completely reconstructed sits approximately 100 feet from the ground with the actual cross and ball being approx. 18 feet high. A helicopter was used to lift the new cross into place on top of the Cathedral.

The parish celebrated 100 years of grace in 1986. Bishop Marcel Gervais wrote “Hundreds of thousands of people have lived in this parish or have been influenced by it in these last hundred years…..we have experienced the Lord’s touch, his guidance, his love and forgiveness through the parishioners, the ministers, priests, and bishops who have served here, and most especially through his presence and action in the sacramental life of the parish.” 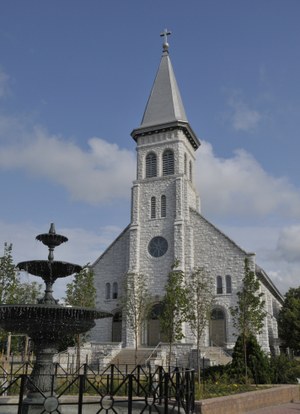 In 2001, the Pro-Cathedral underwent major renovations and restoration, bringing back features of the past and using modern technology to update lighting and acoustics. The major renovations were completed at a cost of $1,242,429. The stained glass windows, and large, carved oak panels were returned to the sanctuary and decorative touches recreated the feeling of the old church and brought warmth and harmony back to the Cathedral’s environment. The entrance doors to the Cathedral were replaced as well.

A new reconciliation room including a partition that can be moved if a parishioner wishes to speak with a priest face to face was included in the renovations.

This major restoration project also included the addition of an expressive division installed beneath the existing 2,093 pipe organ allowing for increased volume control and unlimited music styles to be played.

The history of our parish is written in the hearts and recorded in memories of thousands of people who built our faith community. The life of the parish has been a life of prayer, sacrifice, celebration and work. Our history has been an expression of faith in a God who has fathered us together as his “visible sacrament”, the body of Christ, a people of the resurrection.

Our faith shall continue to live in the hearts of the people in years yet to be recorded.